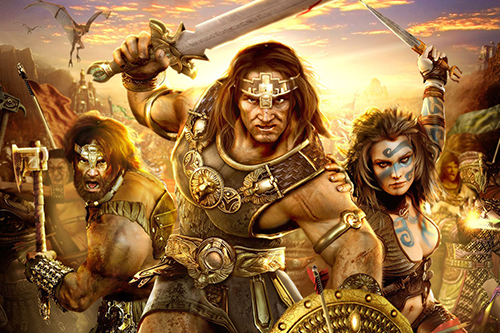 Team: 35 people (including 25 translators and 4 editors).

See also: a report from the project manager about the challenges of localizing Age of Conan in the Mozgorilla magazine.

Age of Conan is a world-renowned game. It was developed by the Norwegian studio Funcom and published by the English company Eidos Interactive.

It sold one million copies in just six days after its release, and within a few months, Age of Conan: Hyborian Adventures became the second most popular fantasy MMORPG after World of Warcraft.

In July 2008, the Russian company 1C signed a contract with Funcom to provide a full localization of the game in Russian and promote it online.

All Correct took on the challenge of preparing the text. The volume of work was significant: the interface elements, equipment descriptions, dialogs and quest text all required translation. At the same time, the deadlines were tight: 1C Company wanted the work done as soon as possible, since Russian players eagerly awaited the release of the Russian Conan.

A little over half a year later, the localized version was ready. The Russian version of Age of Conan: Hyborian Adventures hit the market on February 20, 2009. Such a fast release was possible in no small part thanks to the localizers’ efforts: All Correct translated three thousand pages (900,000 words garnished with tags) in just 11 weeks.

1C Company didn’t want compromises: the work had to be done as quickly as possible to the highest standard.

The All Correct team had to complete the order in the minimum time – just three months. That wasn’t much, but all the other processes remained untranslated: from voice-overs to the operation of the development, marketing and logistics departments. Every small delay would affect the release date.

At the same time, the translation quality had to be as high as possible – nothing less was acceptable for such a world-renowned game. The user base, as a rule very familiar with in-game worlds, would have immediately seen any flaws and inconsistencies in the translation. All Correct’s team placed strict requirements on itself, realizing that the success of the localization and the reputation of the publisher depended on the quality of their translation.

Of particular difficulty were two points identified by the All Correct managers during the pre-translation analysis:

With consideration for these and other features of the text, the managers calculated that 450 man-days would be required to translate all the text (the speed of qualitative translation amounts to 2 thousand words per day on average). We had to assemble a strong team and organize effective interaction between the translators and editors.

A recruitment expert sent a proposal to several hundred Russian translators. Of them, 150 answered by sending their resume. They were immediately assigned test tasks. The completed tests were assessed using our in-house methods for rating translation quality. The best applicants were invited for an interview, and as a result 25 translators and 4 editors were given access to the project – all professionals who could be counted on.

Direct work on the text took place in four stages:

There were some aspects both difficult and exciting, which challenged our team’s translation and creative skills. Among them were:

The All Correct team tackled all these difficulties successfully, and thanks to our well-oiled work processes, the project was completed before the deadline (in two and a half months instead of three).

1C’s localization department performed its own quality check and gave the completed translation a positive rating. After the main project, the customer commissioned All Correct to localize the game’s updates and patches. Then came integrating the translation into the game and testing it.

The Age of Conan project stood out for its scale. It is a huge game set in a gigantic world. It was the first MMORPG localization that we undertook.

From the very beginning, it was clear that only a large team could complete all this work within 3 months. We had to recruit translators with experience in playing online RPGs, and it’s hard to find players who are also translators and know how to plan their time. The success of the project completely depended on the organization: the effectiveness of the editors’ work, the level of interaction between the translators and quality control.

The Media on Age of Conan

Without a doubt, such a large online role-playing game as Conan could not have gone unnoticed. The project’s localization received attention on many portals, such as the large game site ogl.ru and the news portal Lenta.ru.

1C was founded in 1991 and since then has become a leading publisher and distributor of computer games in Eastern and Central Europe. In addition, 1C has developed projects of its own, for example the well-known Theatre of War and IL-2 Sturmovik. In collaboration with independent studios, 1C publishes projects for the PC and consoles (including Soldiers: Heroes of World War II, Space Rangers, Death to Spies, Perimeter, Hard Truck, Fantasy Wars and King’s Bounty).

About All Correct Games

All Correct Games works with the majority of Russian developers and publishers as well as with large international game publishers. The company has localized over three hundred and fifty games and tested over one hundred. All Correct Games constantly works with over twenty language pairs, partners with six recording studios and tests games on various platforms (iOS, Android and PC). All projects are carried out by native speakers of the target language with advanced linguistic skills.