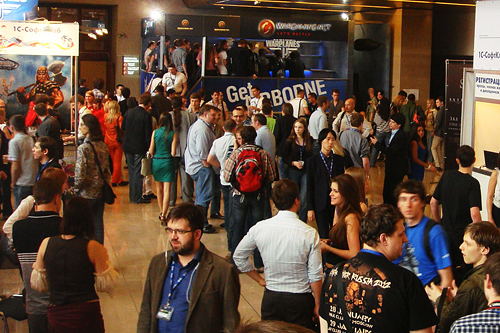 The Russian Game Developer’s Conference (KRI) is the largest in the CIS, with 1,700 people attending in 2012. Given the number of guest speakers from leading foreign companies at the conference, our company’s services were needed to interpret for them.

Game development is a specialized industry with terminology and jargon that are both understandable for specialists without a translation and problematic for poorly prepared interpreters. With that in mind, All Correct needed to find two competent interpreters in Moscow, an objective that was complicated by the fact that the company’s office is in Samara. The process was spread across two steps: applicants first completed a written test developed by All Correct, after which they participated in a Skype interview to assess their interpreting skills and ability to perform well under pressure. The two best candidates were assigned the job.

The project manager worked on location, handling technical issues that came up and distributing the work evenly between the two translators. As always, our company badges made our translators easy to pick out of the crowd.

All Correct’s consecutive interpreters did a fantastic job. IT is certainly not the easiest of topics, but their excellent knowledge of industry-specific terminology allowed them to handle the job with ease.

The first Russian Game Developer’s Conference (KRI) was held in March 2003 at Moscow State University by DTF.RU, a top Russian internet publication for game developers and publishers in Russia, the CIS, and the Baltics. In 2004 KRI grew to include 1,300 people, a number that forced a move to the exhibition facility at Cosmos, a Moscow hotel. The conference continued to grow between 2005 and 2013, cementing its place as the main professional event in the gaming industry. Today it is the most well-known and widely attended event in all of the former USSR, with more than 2,000 people representing over 200 gaming companies from Russia, the CIS, the Baltics, and even further abroad every year.

In 2014 the conference moved from its traditional home at Cosmos to Crocus Expo, and this year it will be part of the business zone at Igromir, the largest gaming expo in the former USSR and Eastern Europe.