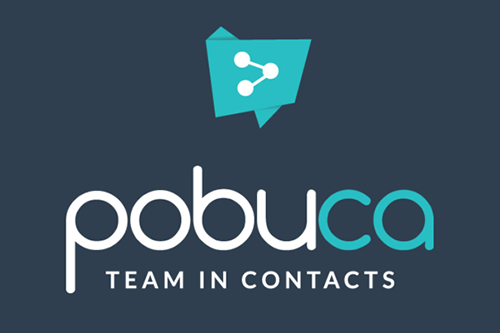 Pobuca is an app for organizing business contacts that enables the user to create a single, universal address book.

The fast pace of modern life and the swiftly changing working environment mean that workers today often have to juggle across multiple communication channels, but without easy access to their contacts.

Pobuca aims to tackle this and save user’s time by simplifying the process of tracking information in business communications. Pobuca is a virtual assistant that keeps all your business contacts up-to-date and always accessible. Currently, this B2B service is used by many organizations around the world.

We were tasked with localizing iOS and Android mobile apps and a web app into Spanish. It was important to adapt the interface elements correctly for Spanish-speaking users, taking into account the grammatical and syntactical features of the target language. For instance, proper noun (Manos Psarakis) in the text was changed to the Spanish version (Manuel Pérez), word order within sentences was rearranged where necessary, and a statement that assumed different translations for the plural and singular versions was divided into two separate elements.

Localization was carried out as follows: one native speaker translated the text, then another native speaker assessed the quality of the translation. The translators, of course, had relevant experience translating IT texts and were well-versed in the appropriate specialized terminology. It was important to the client that we closely adhered to the structure of the source files, as they contained a vast number of tags and special characters. Over the course of the project, we were in frequent contact with the client, who gladly answered our queries and shed light on any thorny issues that cropped up during the translation process.

Pobuca LTD is a startup that was formed in 2015 as a subdivision of Greek IT company SiEBEN. The app was originally named Justphonebook, but the company was targeting the global market, so they decided to change the name to something better suited to a global audience. The new name was far from random: the app’s slogan is Keep BUsiness ContActs in POcket, and that’s how the name Pobuca was created – combining several syllables and letters from these three key words.

Allcorrect Group partners with the majority of Russian developers and publishers, as well as with the largest international game and software publishers. The company has been involved in the localization of over 350 games and other applications and the testing of over 100 games. Allcorrect Group works in 20 language pairs in partnership with six voice-over studios and tests games and software for iOS, Android, and PC, employing native speakers or Russian-speaking testers with a high level of fluency.