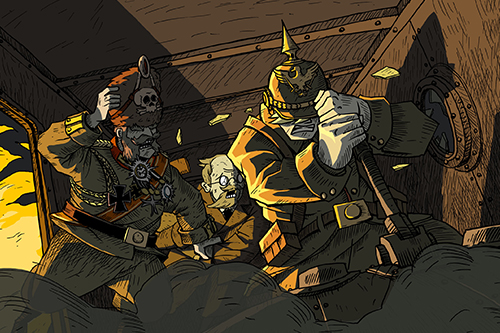 A little about the project

Timeframe: from February to June 2014.

Unfortunately, despite its sheer scale and horror, the First World War does not receive even half the attention directed at the Second World War. This applies both to Russian education and to Russian culture as a whole. This meant that participants in the project had to start preparing for work long before receiving the first text for translation. Alongside the game description, Ubisoft provided us with a list of books and movies that inspired the game’s creators. All Correct’s in-house staff dove into the tragic beginning of the last century with the movies ‘‘A Very Long Engagement’’ (2004), ‘‘Paths of Glory’’ (1957) and ‘‘Joyeux Noël’’ (2005). Good old Hemingway was studied too. The relative unpopularity of the topic also created difficulty in finding a historian to consult with. Nonetheless, we were able to find an expert to help us avoid factual and terminological errors.

One of the amazing features of the game is its internal encyclopedia, which contains facts about the First World War (for example, weapon characteristics data, the military innovations of the age, interesting statistics, and information about key battles).

Work on this encyclopedia exceeded the bounds of standard translation. The developers tasked us with adding information about the Eastern Front to the already present data about the Western Front to let Russian players get a sense of their direct involvement in the described events. Providing scientifically accurate facts and organically writing in the added text turned out to be no easy task, but with expert help we were able to complete it at the required standard.

Dubbing quality is a key point for any game of this kind of class. A lot of time was spent on finding suitable options. The customer wanted us to find a ‘‘quality, manly voice’’ to play the main character. In the end, All Correct invited Andrei Yaroslavtsev (an actor known to many as the voice of Optimus Prime).

The customer on the localization

About this, I have to say that I’m really proud of the final product.

I know I pushed you to do more than the usual localization, especially with the adaptation of the wiki.

The wiki turned out to be really a plus and a key selling point to the game (which wasn’t expected at the start even in my wildest dreams) but because of all the attention, energy and care that you and your team put into them, I have to say that the result is great, and it shows in the feedback not only from the gamers, but also from the newspapers. By the way, I did an interview explaining the research that was made and the adaptation work that was requested by the translators, but I’m not sure if this will see daylight — if it does, I’ll make sure to share it with you.

From what is obvious and what I could understand from the forums, your work on the audio is also amazing, so for all this a huge and gigantic thank you.

I hope this game does well and if it does (it seems to be off to a good start in Russia, and not just because of the Steam incident), remember that it’s in no small part because of you.

The media on Valiant Hearts: The Great War

The game earned the title of Best Game in the Storytelling category at The Game Awards 2014. Russian media also reacted positively to the project.

“A touching, engaging, and in all respects beautiful adventure somewhat tainted by monotonous gameplay and the improbable nature of the Main Villain. On top of that, it’s almost the perfect way to tell your child about the war.” — Riot Pixels.

“Sometimes Ubisoft takes a break from their AAA series, and the results of such experiments exceed all expectations. A fantastic visual treat, a beautiful soundtrack and a touching story – Valiant Hearts was created as a reminder of the Great War, but you’ll have a hard time forgetting the game itself too.” — Kanobu.

Users on the game

The localization quality of Valiant Hearts received positive reviews from the community.

“The game could actually be considered a kind of treatise on history: the narrator (I want to praise the localization here too, it’s very good) explains and relates all the events, fates, battles and their causes. Almost every mission contains facts about the war along with photos.” — NeroHelp.

“On top of everything else, the game is extremely educational and lays out historical facts in an accessible format. Even the localization was done at a very high level of quality.” — Thundervision.

The French company Ubisoft Entertainment (previously Ubi Soft) develops and publishes computer games, and is one of the largest contenders in the European market. The company has studios in over twenty countries, including Russia, Canada, Spain, China, the USA, Germany, Bulgaria, Ukraine, Romania and Italy (the main office is located in Montreuil, France). The company has a huge number of successful games under its belt. Assassin’s Creed, Prince of Persia, Rayman, Far Cry, Watch Dogs, The Crew, Heroes of Might and Magic — to name a few of Ubisoft’s legendary projects.

About All Correct Games

All Correct Games works with the majority of Russian developers and publishers, not to mention with large international game publishers as well. The company has localized over three hundred and fifty and tested over one hundred games. All Correct Games constantly works in over twenty language pairs, partners with six recording studios and tests games on various platforms (iOS, Android and PC). All projects are carried out with the help of native speakers with advanced linguistic skills.