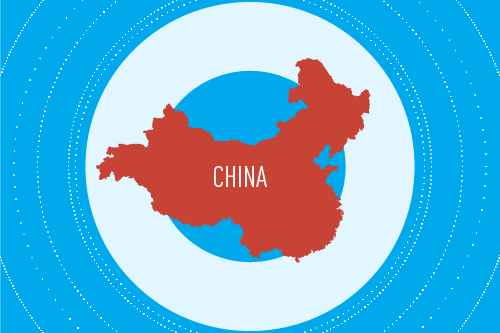 China (officially the People’s Republic of China) is a country in East Asia. It has the largest population of any country in the world (over 1.38 billion people, the majority of whom are ethnically Chinese; they call themselves the “han”) and covers the third largest land area in the world after Russia and Canada.

It is a great nation—a potential superpower, an economic superpower, and a permanent member of the UN Security Council. It is one of the leading spacefaring nations of the world and has nuclear weapons, and the world’s largest army in terms of service members. 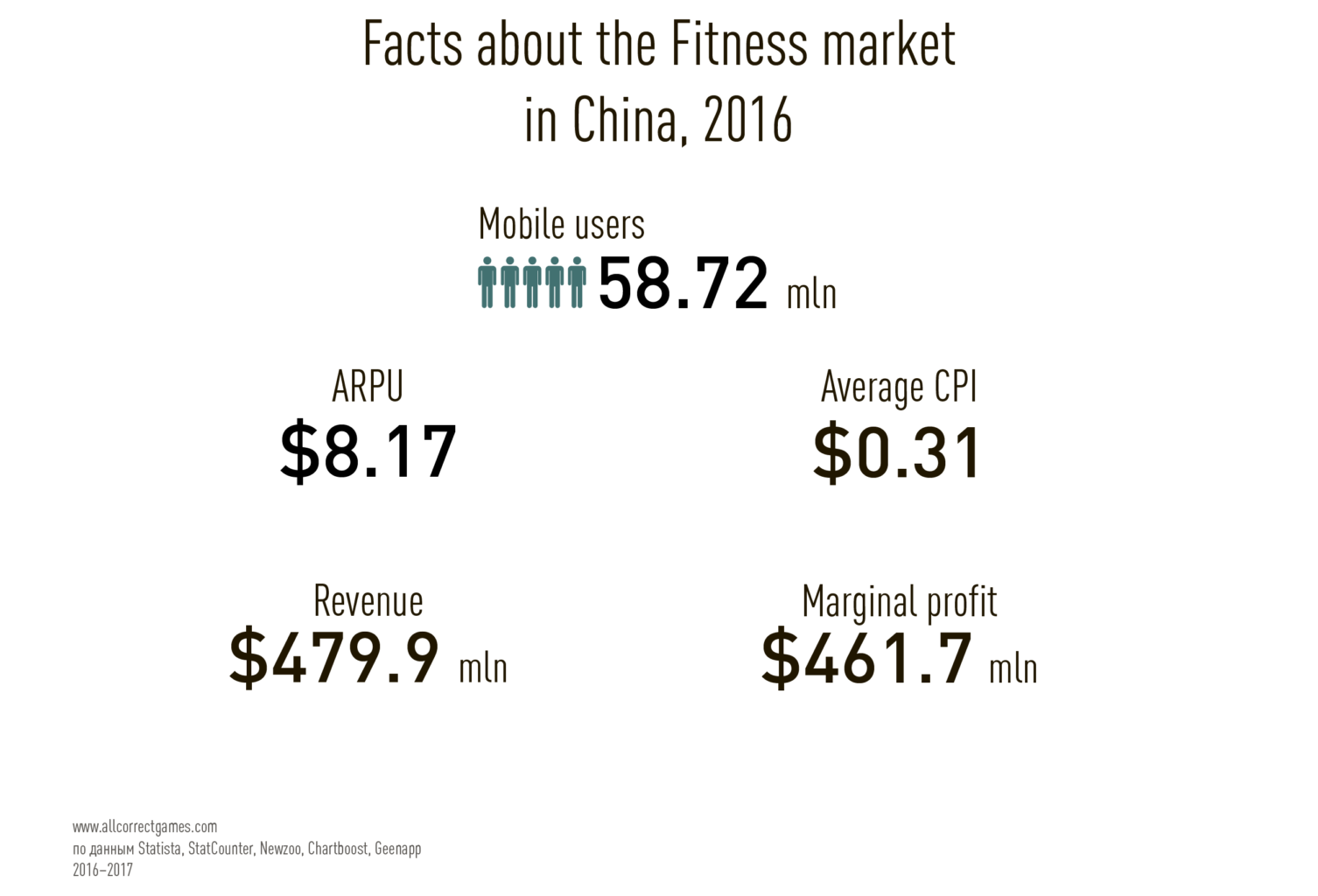 China has a long and age-old history, as well as one of the most ancient and complex writing systems. Until the 19th century, it was one of the most advanced world governments and, generally speaking, the cultural center of East Asia. The Chinese influence on neighboring states remains significant to this day. China is the homeland of many inventions that have changed the fate of mankind. Among them, there are four great inventions: the compass, gunpowder, papermaking, and printing. 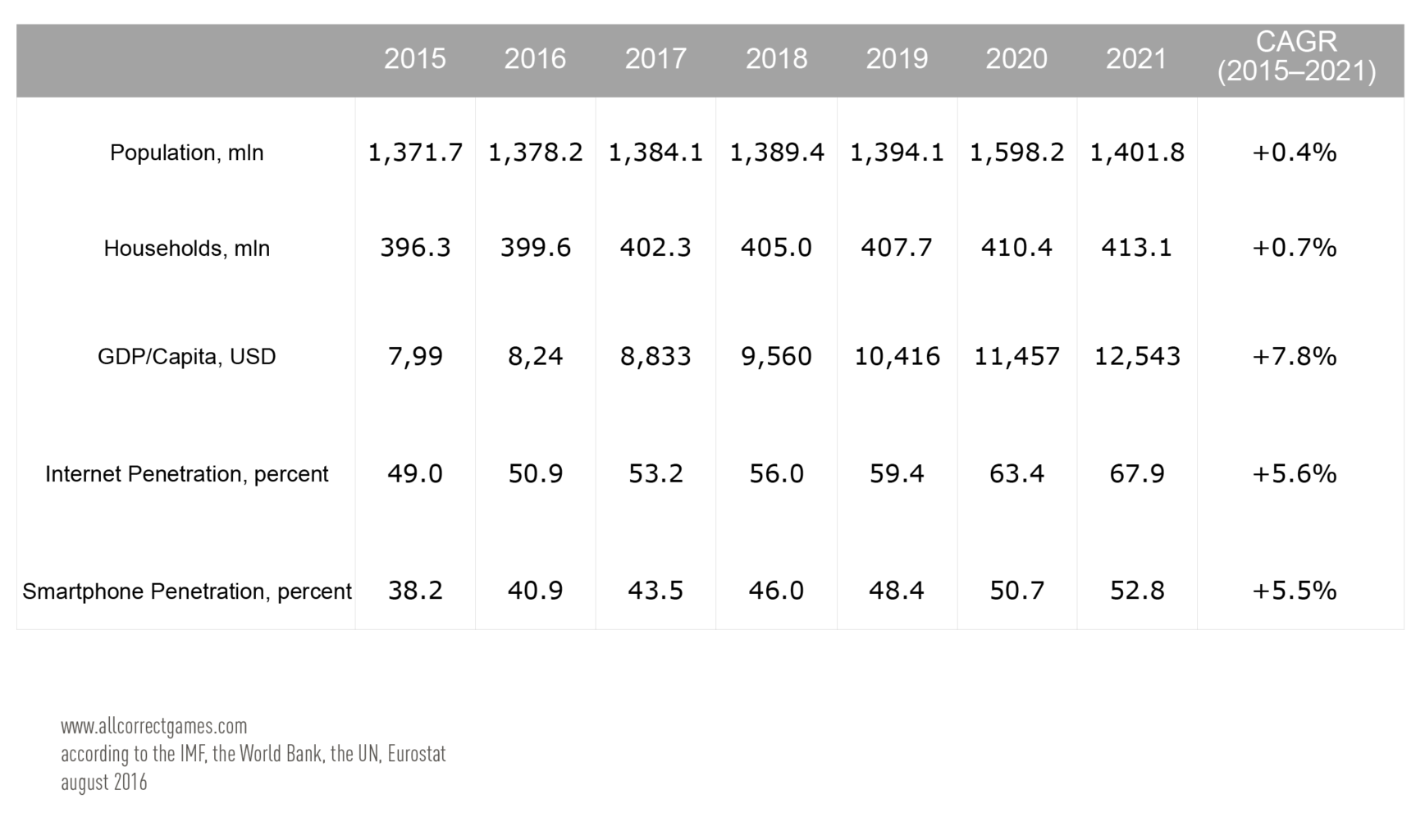 In 2016, the Chinese mobile app market became the largest in the world and the second among mobile fitness apps.

Unlike most countries, China has its own stores for Android apps.

10 most popular Android markets according to Newzoo as of October 2016: 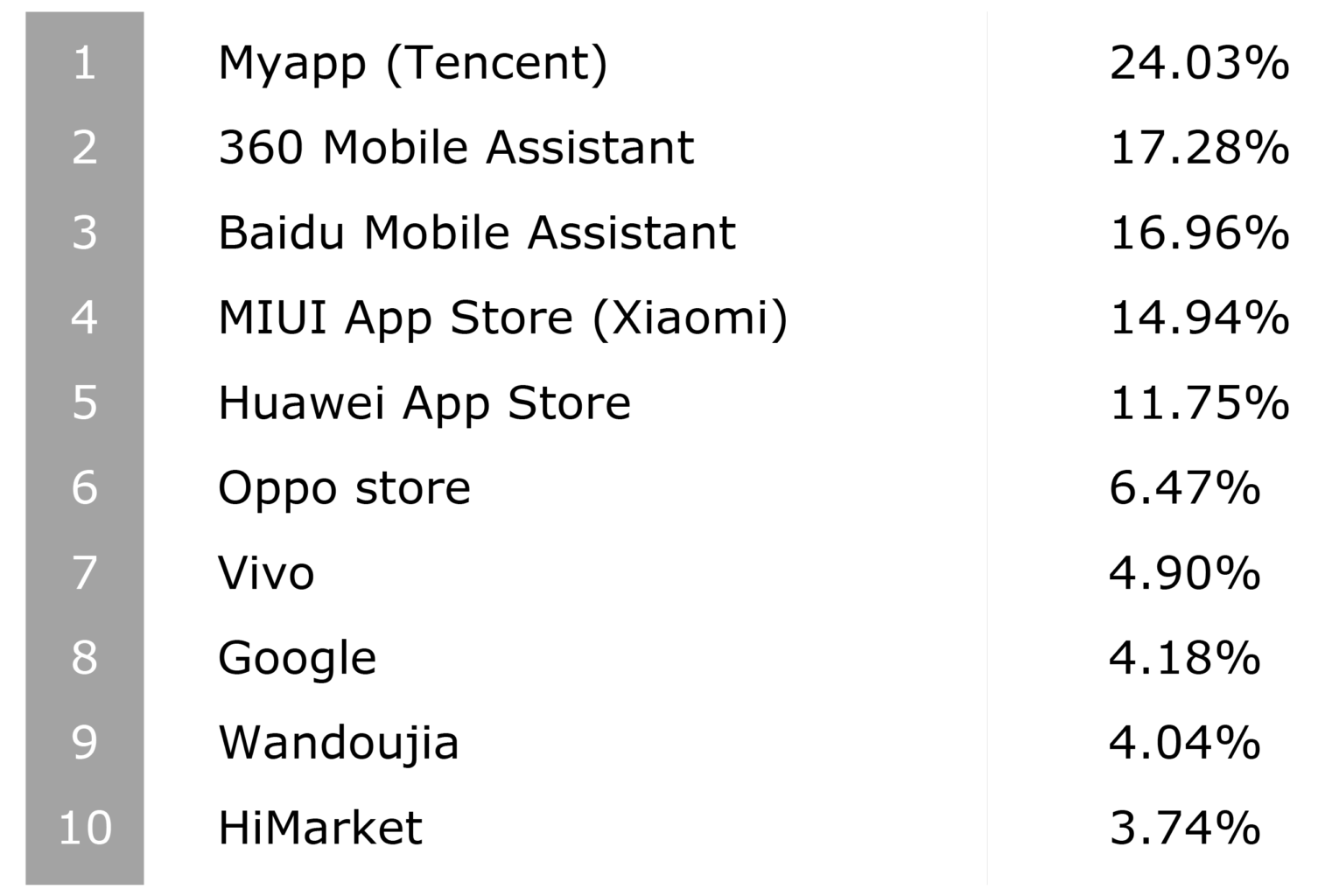 When launching on the Chinese Android app market, it is usually best to go through a publisher or independently make agreements with the 10–20 most popular app stores. Otherwise once your app has been published in one store, it will immediately appear in the others, but without in-app purchases.

An important feature of mobile messengers in China is that they are not just messengers as we understand the concept, but rather entire subcultures and infrastructures with their own payment systems, interest-based groups, online portals, and very active users.

Who Is Using Mobile Fitness Apps in China?

Today sports are a large-scale phenomenon in China. Sports that are popular in China include light and heavy athletics, ice-skating, figure skating, athletic and creative gymnastics, swimming, ping-pong, and tennis.

The Chinese have no equal when it comes to ping-pong, which is one of the least expensive, and thus most accessible sports. Year after year, the Chinese produce stunning results at international competitions. Today one of the most quickly growing sports is tennis, and both figure skating, and ice-skating have recently begun to gain in popularity. Team sports that are popular in China include basketball, hockey, volleyball, and soccer. Over the last few years, all team sports in China have been overtaken by basketball in terms of popularity. Despite the genetic tendency of Chinese people toward shorter stature, some athletes have been granted excellent basketball physiques by nature. Volleyball is less popular in China, although the Chinese women’s volleyball team is one of the best in the world. Hockey is actively gaining popularity in China—skating rinks are being built everywhere, and significant sums of money are being spent to train athletes. Soccer, on the other hand, is not especially developed in China, although the sport has plenty of Chinese fans.

On the whole, the significance of sports has grown greatly in China over the last few decades, and the number of people participating in sports and going to gyms has increased. Nowadays, most Chinese people practice fitness not primarily to stay in shape, but rather for their health. More and more Chinese people are having problems with high blood pressure and diabetes, and one in five Chinese people is overweight (according to the WHO). Another impetus for the development of sports is a program initiated by the Chinese National Council for 2016–2020 designed to inculcate a “new state consciousness.” This plan includes health and fitness and calls upon Chinese people to add daily exercise to their schedules. This program includes the development of a chain of fitness centers. The goal is for there to be a gym at least one mile from every Chinese person, with 1.8 square meters of space per person. Starting in 2011, the number of people going to the gym has increased by one million per year.

Today the Chinese fitness app market is experiencing a rapid increase. Even small startups are quickly gaining popularity and attracting investors. Apps allow Chinese people to not only track their physical activity, but also to share their results on social networks, which is very important to them.

The total volume of the fitness market in China was 1.11 billion USD in 2016. Almost half of that revenue was generated by mobile fitness applications. 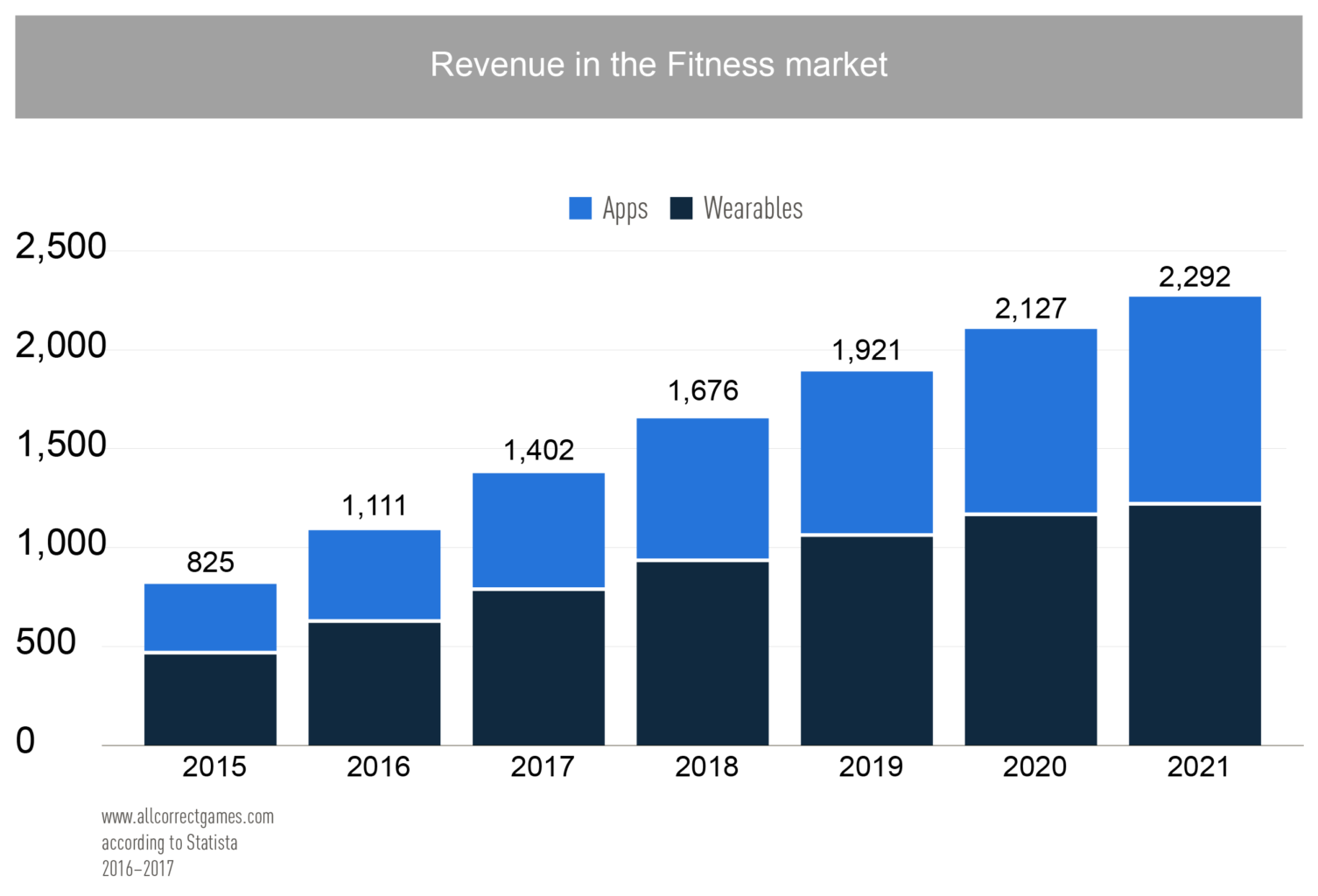 A steady increase in the number of users of mobile fitness apps can be observed, and according to forecasts, it will continue into 2021. 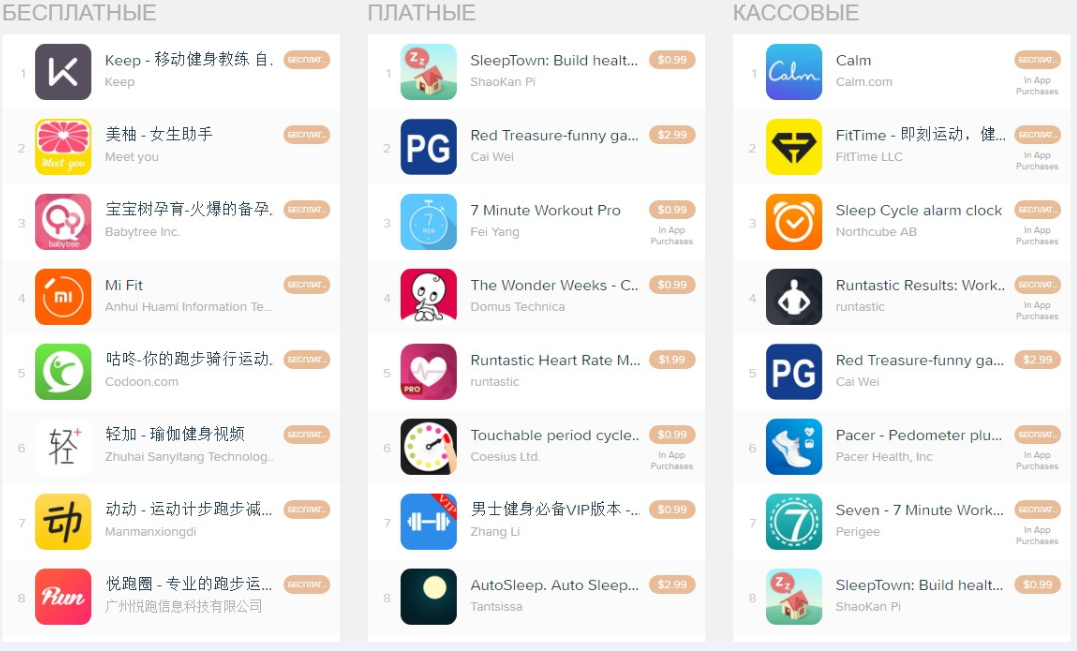 Chinese is a language or language branch of the Sino-Tibetan language family made up of variations that are mutually comprehensible to varying degrees. Chinese is the most widespread modern language, with a total of over 1.3 billion speakers (982 million native speakers according to 2016 figures). There are currently two different writing systems: simplified and traditional.

When localizing text from mobile applications, the simplified writing system is used for mainland China and Singapore, and the traditional system is used for Hong Kong and Taiwan. There are also lexical distinctions that must be considered—among other things, different gaming terms might be used for various countries and areas.

Like English, Chinese can be considered a compact language, but, as a rule, while there are generally fewer characters in a text, they are more difficult to write and thus need to be written in a larger font. Chinese texts take up more space vertically, but less horizontally than English. Font is a major issue when localizing into Chinese.

Chinese has about 80,000 characters, but knowing 2,000 of them will allow the reader to understand most publications.